If you have further questions about hamstring tears then please feel free to contact us here.
Alternatively you can book an appointment to see us below.

Hamstring tears are a common injury. The vast majority of these injuries represent simple muscle strains which can be managed without an operation (conservatively).

In a small but significant minority the entire hamstring muscle / tendon unit is pulled off the bone where it attaches to the back of the pelvis (proximal hamstring avulsion). The available scientific literature supports surgical reattachment of the hamstring to avoid long term functional impairment and allow return to sports.

What is the mechanism of injury? 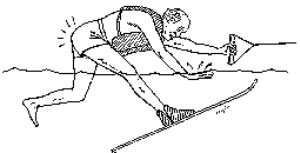 Most hamstring muscle injuries result from a sudden acceleration such as when sprinting. Tears of the hamstring origin, where it inserts on the pelvis most commonly arise from a forceful pull on the hamstring muscle with the knee in a straight position. The most common activity leading to this injury is waterskiing (see figure 1). Other common causes includes doing the "splits", simple slips and trips and sports such as soccer, rugby and tennis.

What are the symptoms?

Most patients will describe an injury which leads to excruciating pain in the back of their thigh. The pain may be so bad that it makes them physically sick. Other common symptoms include:

What are the physical signs?

How is it diagnosed? 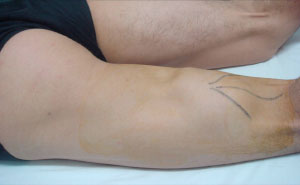 The diagnosis is most commonly made based on a series of questions regarding the injury and a physical examination. In addition you will require a magnetic resonance imaging scan (MRI) to define the injury in more detail.

What is the treatment?

Historically, the treatment has been conservative, relying on physiotherapy and painkillers. There is growing evidence, however, that some groups of patients do better following surgical reattachment. Patients with complete tears and those who present within 6 weeks of injury tend to do best.

The operation involves a vertical 10-15cm incision close to the buttock. Through this incision the torn hamstring tendon is retrieved and fixed back onto the pelvis using strong bone anchors. You will require rehabilitation under the supervision of a physiotherapist afterwards for at least 3 months.

Mr Barnett learned this technique during his fellowship training with Dr David Wood in Sydney, Australia. Dr Wood has the largest series of hamstring reattachments in the world, receiving referrals from all over Australia. Mr Barnett is one of very few surgeons in the UK who undertake this procedure.

If you think you have badly injured your hamstring muscle you should see your GP as soon as possible.