If you have further questions about anterior cruciate ligament (ACL) injury then please feel free to contact us here.
Alternatively you can book an appointment to see us below. 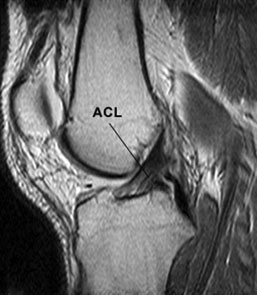 The anterior cruciate ligament (ACL) is a 38mm long band of fibrous tissue that connects the femur (thigh bone) to the tibia (shin bone) (see Fig 1). It prevents the tibia sliding forward on the femur. The cruciate ligament is generally not required for normal activities of daily living. However, it is essential in stabilising the knee when performing twisting actions such as sidestepping, pivoting and landing from a jump.

The classic history of injury

Patients frequently describe hearing a "pop" or "crack" accompanied by pain. The knee often swells up within an hour. Patients frequently complain of pain on the outside of the knee. The ligament on the inside (medial collateral ligament) of the knee joint may also be disrupted resulting in severe pain and swelling.

The diagnosis of ACL rupture is usually made based on the mechanism of injury, description of symptoms and a thorough physical examination of the knee. Several tests will be performed on the affected knee assessing any abnormal forward movement (translation) and rotation (pivoting) of the tibia on the femur. An X-ray will performed to exclude any bony injury and you will also require a MRI (magnetic resonance imaging) to assess the extent of the injury to other structures including the menisci (shock absorber cartilages), articular cartilage (gristle) and other ligamentous structures.

The initial treatment focuses on the acute injury. A useful acronym to remember is RICE, consisting of Rest, Ice, Compression and Elevation. Anti-inflammatory medication (e.g. ibuprofen) and painkillers (e.g. paracetamol) are of great importance in relieving swelling and pain.

The subsequent treatment of an ACL injury depends on the future aims of the patient and the degree of symptoms they have. Treatment may be without an operation (conservative treatment) or with an operation (surgical treatment). Patients who have ruptured (torn) their ACL who are content with activities that require little in the way of side stepping (running in straight lines, cycling and swimming) may opt for conservative treatment. Surgical treatment cannot guarantee that further injury to the joint will not occur. It is designed to stabilize the joint in certain activities.

The mainstay of conservative treatment is physiotherapy which aims to reducing swelling, restore the range of motion of the knee joint and restore full muscle power. Proprioceptive training is also required to develop the necessary protective reflexes required to protect the joint during normal activities of daily living. It is important to alter your sports to ones that involve straight line activity only. It may still be possible to play social (non-competitive) sport without instability as long as you do not change direction suddenly. It is often possible to ski although a brace may be required and you may need to stick to groomed runs.

Patients whose occupation demands a stable knee or who plan to continue playing competitive sports are at risk of repeated injury resulting in tears to the menisci (shock-absorber cartilages), damage to the articular cartilage (gristle) leading to degenerative arthritis and further disability. In these patients, surgical reconstruction is advised.

It is essential to rehabilitate the knee prior to surgery (so called "prehabilitation"). This is generally necessary when the injury is more than two weeks old. The rationale for prehabilitation is to prevent stiffness. The ideal patient has a pain-free knee with full muscle power and a full range of motion. 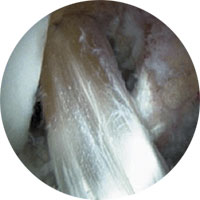 Through a single 3-4cm incision two hamstring tendons are removed to be used for the graft.

Arthroscopic ("key-hole surgery") is used to determine the position of the graft within the knee.

Small tunnels are then drilled in the tibia and femur.

The graft is introduced into the knee through these tunnels (see Fig.2) and is rigidly fixed in place using a special device called an Endobutton® in the femur and a screw in the tibia. 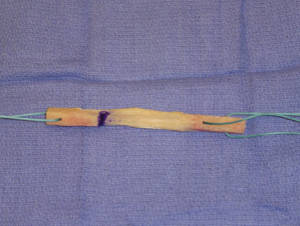 In most men and competitive athletes, Mr Barnett will use this type of graft. It has a number of advantages, including quicker "bony" healing of the graft and better restoration of stability (Lachman, pivot shift, and instrumented laxity testing) compared with hamstring grafts(1).

A recent study of 12,643 patients from the Norwegian Cruciate Ligament Registry (2) showed a lower rate of graft rupture in BPTB group versus hamstring graft group. Furthermore, a recent randomized controlled trial has also shown more patients who underwent ACLR with BPTB autograft were participating in sport on a weekly basis compared with patients who received hamstring autograft (3).

The most important factor determining success following surgery is postoperative rehabilitation. You will see the physiotherapist prior to discharge who will instruct you on exercises you should begin to work on. This is the start of a structured rehabilitation protocol supervised carefully by skilled physiotherapists. The graft is known to be weak in the first three months following surgery and it is our experience that rehabilitation should not be too aggressive.

These are rare complications, however, the combination of knee injury, immobilisation of the limb, smoking and the oral contraceptive pill or hormonal replacement therapy (HRT) all multiply to make the risk greater. You should inform the surgeon if you have any history of thrombosis. Smoking should be stopped a minimum of one week prior to surgery.

Excessive bleeding (2% of all patients)

This is more common in patients taking aspirin or nonsteroidal anti-inflammatory drugs (NSAIDs) - such as naproxyn, voltarol and ibuprofen. These should be stopped at least one week prior to surgery. If there is a significant collection of blood within the knee, this may require draining.

It is common to notice bruising in the limb particularly in the thigh or around the wounds. Sometimes this may extend down to your ankle. Bruising is more common in patients taking aspirin or NSAIDs.

Infection (1% of all patients)

Surgery is undertaken in an operating theatre in an ultra-clean environment. In addition, antibiotics are used to reduce the risk of infection. Despite these measures, infection can still occur. This may present with a feeling of warmth and redness around the knee. It is imperative that you contact your surgeon prior to the commencement of any antibiotics.

It is very common to develop a patch of numbness close to your wounds. This is nothing to worry about and tends to shrink in size over time.

The hamstring muscles recover rapidly; tendon regrowth may be felt at 2 weeks following the operation. However, scar tissue which forms around the reforming tendons may tear. This may be felt as a pop or tear behind the knee. This problem usually occurs before the 6 week stage following surgery and may set your progress back a couple of days.

This is poorly understood and occurs in <1% of grafts.

Q. How long will the operation take?

Q. How long will I be in hospital?

A. You will normally be discharged later the same day following your operation.

Q. Will I need crutches?

A. Yes. You will need to use these for up to two weeks following the operation.

Q. Will I see a physiotherapist after the operation?

A. Physiotherapy is commenced immediately. Your physiotherapist will supervise strengthening and walking.

Q. What medications should I stop before the operation?

A. Any blood thinning medication and hormonal preparations (such as the oral contraceptive pill) should be stopped. Your surgeon will inform you when the medication needs to be stopped.

A. If you drive an automatic car you may resume driving as soon as the pain allows following left knee surgery. If the right knee has been operated upon, driving is allowed when you are walking without crutches and can make an emergency stop. Always check with your insurance company prior to driving again.

Q. How long does it take for the swelling to go away?

A. Most of the swelling should have disappeared by 2 months following surgery.

Q. How long will I need off work?

Q. When can I start playing sport again?

A. Return to competitive sport is allowed at 9-12 months following surgery, provided that you have completed the rehabilitation programme.